One of the best American Airlines offer is soon to expire. The offer has been around for some time, but is due to expire on Halloween. This offer below however waives the annual fee the first year. It’s not the standard offer, they usually offer. I know, a scary notion no doubt.  However, if you are on the fence about getting this American Airlines 60,000 miles offer, I would jump off the fence and get it before its gone.  No telling when it will return.  The Barclays Aviator AAdvantage MasterCard is offering a whopping 60,000 miles after your 1st purchase. There is NO minimum spend requirement AND the annual fee is waived for the first year. That’s enough miles for a couple round trip coast to coast flights, or premium cabin redemptions, for domestic travel. I personally save these miles for premium cabin international travel, which can used on their partners, such as Qatar or  Etihad, or any OneWorld partners. 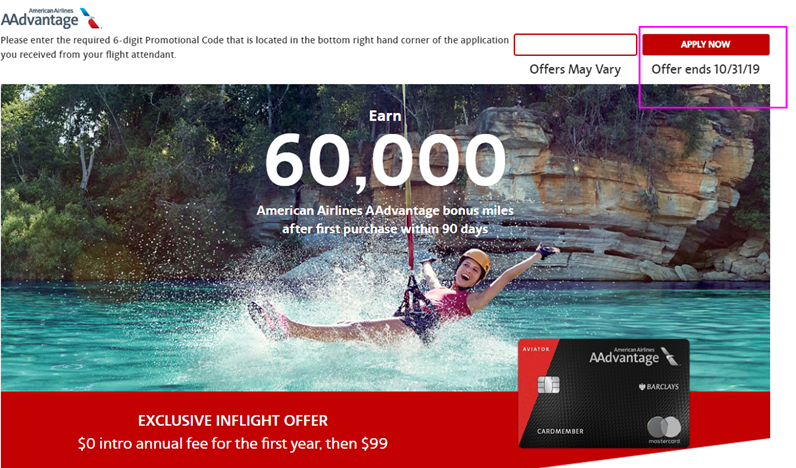 The card has some nice perks, which include priority boarding on American Airlines flights (not code-share partners). First bag free, for up to 4 people, and some new perks such as a $25 credit on inflight WiFi purchases, and an anniversary companion certificate for 1 guest at $99 + taxes. Its also a MasterCard, which gives you $10 monthy credit to use at Lyft.

I had this card last year, so I wont be reapplying for it this time around.  I will however, get this for my wife, who has not had this card. As a family of 4, we need 2-player mode to accrue lots of miles for premium cabins.  Are you going to get this card? If so, what are your travel goals for the miles?  Happy Travels!

Last year was an amazing year for credit cards and so far, 2017 is starting out with a punch. Currently, there are two offers I would not ignore if you are looking to pick up a new credit card – or two.  The Chase United MileagePlus Explorer card is currently offering 50,000 miles, and is available to everyone.  After meeting the $3,000 spend, you get 50,000 miles which is enough for 2 round trip coach saver award tickets in the U.S. or Canada.  They can be redeemed for first class travel in the U.S. or Canada.  United has a handy chart here, to see what’s possible with your miles. Check it out.

The second card I wouldn’t ignore is the Citibank AAdvantage Mastercard, which also nets you 50,000 miles, to use on American Airlines, or its partners. Although American Airlines recently devalued its miles, I still think you can get some pretty good deals to Europe and even South America, on partners such as Air Berlin, and LAN.  They are also great to use with British Airways on short haul flights, or intra-Europe.  With stellar service on both carriers, you will have no problem traveling smoothly.  The other aspect of this offer, is Citibank cards are relatively easy to get, and you can receive the bonus more than once, so racking up tons of AAdvantage miles will be no problem.

Both cards come with a ton of perks, such as free baggage allowance, anniversary miles, priority boarding, and no annual fee the first year. Both offers wont last, and I suspect will go away soon, so I would get them now.  Of course, keep in mind with Chase, the infamous 5/24 rule applies, which means if you have applied for more than 5 credit cards, from any bank, within the past 24 months, the likelihood of approval is zero. If you haven’t, then you’ll be lucky enough to score this card. Just make sure you have a travel goal in mind, so you can use these miles, or you can just bank them for future travels on United and its partners.

I actually applied for both of these cards last year, and was approved. The Chase United MileagePlus card came with two United Club passes, which I won’t be using this year, so I’d like to give you a chance to take ’em off my hands! Please comment on how best you would use these miles, and I’ll pick someone randomly. I’ll announce a winner at the end of the week. The Hogan A319 model is not included, in case you were wondering. Happy Travels!

Since US Airways and American Airlines have merged, it made sense for US Airways to join OneWorld, as no way would American Airlines leave OneWorld and join Star Alliance.  I’m not sure if this is good or bad right now, but in terms of miles, it could be a positive situation for us. The plan is that US Airways will have officially joined OneWorld by the start of 2014, which is not too far from now. When United and Continental became one last year, we saw both mileage accounts merge eventually, and If history serves me right, we will see our US Airways Dividend Miles merge with any American Airlines AAdvantage miles we may have, thus creating a super pot of miles (if you have a lot in both of them), which could be redeemed for some superior trips in first or business class in any of the OneWorld carriers.  I recommend getting the US Airways MasterCard while you can, since they will end their relationship with Barclays.  Eventually, I am sure we will see a new card under the new merged airline.  The sucky part is they are leaving Star Alliance, which includes Thai Airways and Lufthansa, which have a great business class product on their A380 fleet. The cool part is, they are joining OneWorld, which has Malaysia Airlines, and they have a pretty cool First class product on their A380’s.  My favorite destination is Kuala Lumpur, so I am welcoming this move.  I also have racked up over 180,000 American Airlines AAdvantage miles, and I have over 250,000 US Airways Dividend Miles, which brings my total to a whopping 400,000+ miles.  I even have time to accrue more, as I will apply for another Citibank AAdvantage MasterCard in my next upcoming churn. Hopefully, I will have enough miles to fly a family of 4 in business class to KL, so my daughters can swim with the fishes in Pulau Redang.

So now your asking: What should I do Oz? Well, the plan is simple ; rack up as many US Airways and American Airlines miles as you possibly can between now and the end of the year. Like most of my readers, you have no status, and you are an infrequent flier, so getting miles with credit card sign-ups is your best option.

So there you have it – some lucrative ways to rack up some major miles before the merger and even after the merger!! More than enough for a ticket to anywhere in the world- for FREE!

One of the most overlooked aspects of redeeming award tickets, is airline partnerships outside the general alliances.  It’s sort of like the mistresses…no one knows they exist, until someone uncovers them! Well that day has come…because I am going to uncover some of them in this post.  I’m going to use some of the major airlines.  Let’s look at United Airlines for example. United is a Star Alliance member, meaning you can redeem your United miles on flights on Lufthansa, Turkish, Thai, and the list goes on. Just look at the Star Alliance membership chart below.  However, what is overlooked at is you can also redeem your miles on the OTHER partners….EVA Air, Hawaiian Airlines, Aer Lingus, Jet Airways, and more.  It may be beneficial for you to book it on Hawaiian, rather than flying United  to Hawaii, because Hawaiian has non-stop flights from SEA, PDX, SJC, where United doesn’t.  You may want to consider flying EVA Air to Taipei, rather than United, simply because the time schedule and departure times are better.  You just have to look at your options, but know that the OTHER partners are there and should be looked at for award redemptions. Here are some other charts for Delta, US Airways, American Airlines.  US Airways is a bit stingy though, as they wont let you redeem Dividend Miles on most of these partners below, but you may earn US Airways miles if you are flying them.

American Airlines chart is even better. You can use their miles to book award tickets to Tahiti and Fiji. You can also redeem AAdvantage miles on Alaska Airlines. Non-stop flights to Las Vegas from Seattle and Portland just got easier. Delta Airlines lets you book awards on Malaysian Airlines, Alaska Airlines, and Air Tahiti Nui, for those hard to get Tahiti flights. When booking award tickets, always be aware of the other partner airlines and their routes. The agents don’t always tell you the best routing, as they themselves are human drones with a set of instructions.  Heck, they don’t even know their own routing rules, much less world geography.  Of course, you can always email me, and I can help you figure out the best options. Happy Travels!